Sydney has once again proved why its New Year celebrations are world famous, with bursts of brilliance providing a spectacular backdrop to the Harbour Bridge and Opera House as Australia welcomed in 2016.

Synchronised to a soundtrack of some of 2015’s biggest hits, including Uptown Funk and Hold Back the River, the almost 15-minute fireworks show sent crowds into rapturous cheers and applause.

The $7 million party kicked off early on Thursday, with a vast and proud Aboriginal Welcome to Country ceremony ushering in the iconic fireworks display, putting local Gadigal, Wangal and Gamaragal traditions front and centre in global new year celebrations.

At 8.40pm the Sydney Harbour Bridge was transformed into a giant canvas, using new technologies to present the world’s oldest dance form in honour of Australia’s First Nations culture, land and peoples.

Fireworks and special effects turned the structure into a giant Aboriginal flag, complete with a red waterfall cascading from the bridge base shortly after the sun set for the last time in 2015.

Sail boats, yachts and private ferries took up position on the harbour, for prime positions early on Thursday. 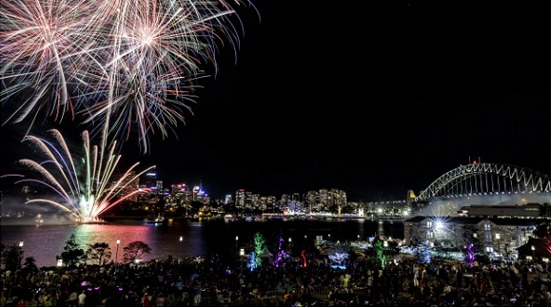 (The fireworks seen from Barangaroo park. Photo by Brook Mitchell)

On land, the best vantage points filled up hours before the clock struck 12.

And the massive crowds that filled the Harbourside parks and reserves had claimed their prime positions early – some camping out for days to secure their spot.

The Sydney Opera House grounds were full by 2.30pm, with crowds settling in for a nine-and-a-half hour wait for the midnight fireworks.