Home
News
news
Citizenship for cash is not our policy: Tony Abbott

Citizenship for cash is not our policy: Tony Abbott 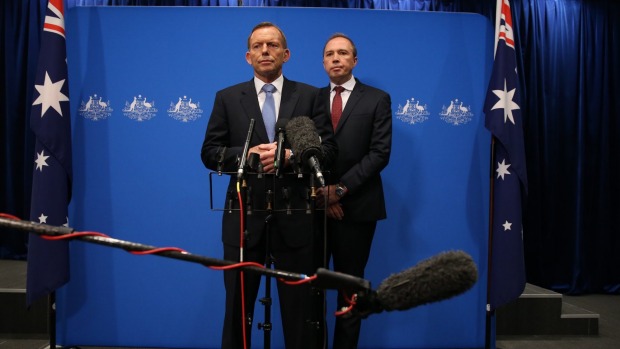 A radical proposal to allow migrants to pay their way to immigrate to Australia has been played down by Prime Minister Tony Abbott as a discussion paper, and not as a policy of the government.

In a press conference on Monday morning, Mr Abbott said that the Productivity Commission was asked to look at a whole range of issues, and it was unlikely the Coalition government would allow migrants to pay entry fees to gain permanent residency visas as floated by the Commission in its release on Friday.

“Everyone knows that the immigration policy of this government is fairly and squarely based on what is in the best interests and what is in accordance with the best values of our country,” Mr Abbott said. “That’s the way it is and that’s the way it will stay as far as I’m concerned.”

As reported by Fairfax on Monday, the Productivity Commission has been investigating a price-based immigration system that would use entry fees as the primary determinant for who gains entry to Australia.

Such a scheme could help the government rein in the budget deficit by bringing in tens of billions of dollars in extra revenue and allow it to trim the number of public servants administering Australia’s immigration system.

The government established the inquiry, which will issue its final report next March, in a deal to secure Liberal Democrat senator David Leyonhjelm’s support for the reintroduction of temporary protection visas for asylum seekers.

Mr Leyonhjelm said he was not surprised by Mr Abbott’s comments but argued that the logic of the proposal would “penetrate government ranks” once the commission delivers its report next year.

“Australia does need more immigrants,” he said. “It will lower our taxes and we might love [immigrants] a lot.”

In the press conference Mr Abbott also claimed that by preventing people smuggling boats making the journey to Australia, the government had saved half a billion dollars, ahead of this year’s budget to be released next week.

“The great thing about Operation Sovereign Borders is that, in stopping the boats, we have stopped the deaths,” Mr Abbott said.

“If you want to keep life safe, you’ve got to keep the boats stopped. But not only has there been a human dividend, a very important human benefit from stopping the boats, there has been a budget dividend as well.

“In the budget to be brought down next week, there will be a half a billion dollar saving as a result of the success of Operation Sovereign Borders.”

with Matthew Knott and Deborah Snow from SMH